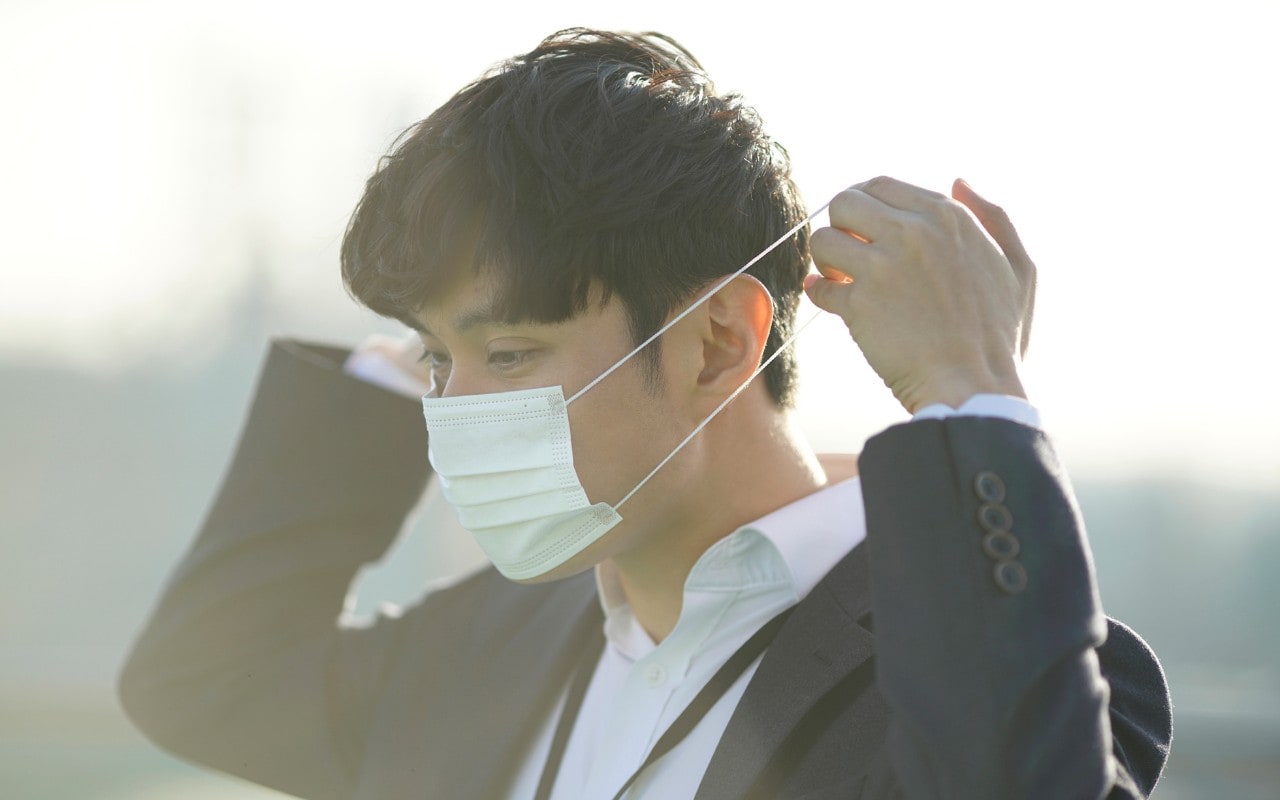 It’s not just about disease and pollution, in the Far East face masks are a matter of complex etiquette with a fabled history

Ineffective, fiddly, and terrible for the environment, surgical masks have nevertheless been seized by the masses amid the coronavirus panic that is tearing across the world.

Never mind that diligent handwashing is your best defence against the spread of infection, a bar of soap just doesn’t carry the same dramatic appeal. Indeed, the face mask has long been a staple in Asia, for reasons far more nuanced than just as a barrier to germs and pollution.

Here we examine the origins of a custom that, considering how useless it is on a practical level, has proved enduringly stubborn since the early 20th century – and examine whether this time it might just catch on in the West.

To prevent catching or transmitting coronavirus in public, no. They are not recommended by the NHS, Public Health England (PHE), the World Health Organisation (WHO), or the American Centers for Disease Control and Prevention (CDC) because there is no solid evidence they work. Indeed, they may do unforeseen harm.

Masks cause people to touch their faces more, increasing – not decreasing – the chances of them picking up the virus. They do not fit tightly and allow airborne particles in. People also wear them for much longer than they are designed, causing them to become moist, unsanitary and an ideal environment for bugs.

Most importantly, there is a risk that masks distract people from what the evidence overwhelmingly suggests is the best way of protecting yourself and others – washing your hands frequently. But as previously mentioned, hand-washing is boring and face masks look the part.

In the UK, there are concerns that stocks of surgical masks will run low as a result of the panic buying. The British Dental Association, for one, is rationing orders. In the US, Surgeon General Jerome M. Adams didn’t mince his words when he issued the following Tweet: “Seriously people — STOP BUYING MASKS! They are NOT effective in preventing the general public from catching #Coronavirus, but if health care providers can’t get them to care for sick patients, it puts them and our communities at risk!”

Why are people buying them anyway?

According to behavioural psychologist Jo Hemmings, “herd mentality, and a mixture of fear and greed.”

She told us: “When we see others do it, we feel we might be missing out if we don’t copy them. It is a way of taking some control in a situation we have little control over. Interestingly though, in spite of the panic buying of masks, you still see very few people actually wearing them out and about. At the moment they seem to be an insurance policy -people just feel safer just owning them.”

Medical Anthropologist Florence Walker suggests that many of us simply don’t believe the authorities who tell us masks are useless. “Hand-washing doesn’t have the same ‘magical’ talisman property that a face mask has,” she says. “In some ways it’s difficult to comprehend how masks couldn’t work.”

As to whether we’ll all be wearing them in the West at some point? “No. Not overnight, at least,” she says. “Face mask wearing has been a staple public health measure in Asia since the 1910 flu outbreak. It’s ingrained into their cultural psyche in a way it isn’t here.” Which leads us on to…

When did face masks first gain popularity in Asia?

During the devastating Manchurian pneumonic plague in Northern China in 1910, which had a 100 per cent mortality rate, and it’s all thanks to a British-educated doctor who was the first to predict, correctly, that the disease was spread through air particles, not by way of fleas or rats.

Wu Liande developed an early version of the face masks we know today, in the shape of a cotton pad wrapped in gauze, which is tied to the head over the nose and mouth. This proved successful in limiting the transmission from patients to medical workers (notably, one French doctor proclaimed Liande’s theory to be nonsense and refused to don a mask; he later paid with his life).

The 1910 outbreak killed 60,000 people within a year until it burnt itself out, and Liande’s masks were seen worldwide as a triumph in preventing a worse outcome than that. Photos of them had dominated the news coverage and when the Spanish Flu broke out less than a decade later in 1918, this time spreading out of Asia and killing at least 50 million people globally, masks became a staple.

While the West’s flirtation with face masks was brief and all but died out with the Spanish Flu virus, Asia saw frequent situations that seemingly called for them; from repeating epidemics (Asian Flu in 1956, SARS in 2002 and Swine Flu in 2009), and the threat of chemical warfare (they were issued during the Korean War), to natural disasters like the Great Kanto Earthquake of 1923 in Japan, which choked the air with smoke for months, and the air pollution that has steadily worsened over the years.

Masks, today cemented in the east as a visual symbol of protection against continuing invisible threats, continue to be worn across Asia as a would-be barrier, regardless of how effective they’ve proven to be.

A matter of manners

“Japan is a country renowned for its extremely polite mannerisms,” writes our destination expert Danielle Demetriou, and this explains a lot about the wider Eastern culture and its dedication to the wearing of face masks in public. Here, they are less about practicality and more to do with a collective sign of togetherness and a courtesy to others.

Writing for Refinery 29, Chinese journalist Connie Wang remarked: “I tell my American friends that I wear [a face mask] because of the pollution, but the truth is that I wear face masks because it’s just the thing to do; a gesture toward good hygiene.” She adds: “In these countries, a mask is a symbol of reassurance. It represents communal trust, a pact that we’re all in this together.”

Sociologist Peter Baehr wrote of the SARS coronavirus outbreak in 2002, which had a 10 per cent mortality rate: “Mask-wearing became the quickly improvised, if obligatory, social ritual; failing to don one was met with righteous indignation, a clear sign of ritual violation. The mask symbolized a rule of conduct – namely, an obligation to protect the wider community.”

Baehr further suggests that the anonymity that results from obscuring much of one’s face in public – while it might feel disconcerting; even hostile to some – provides, in this part of the world, a sense of solidarity between people from all classes and walks of life. Tellingly, when Chinese President Xi Jinping visited Wuhan yesterday for the first time since the coronavirus outbreak, he did so wearing a mask at all times.

“By disguising an individual’s face, it gave greater salience to collective identity,” he writes. “By blurring social distinctions, it produced social resemblance. Mask-wearing activated and reactivated a sense of a common fate; it was a mode of reciprocity under conditions that supremely tested it. Accordingly, mask demeanor was much more than a prophylactic against disease. It showed deference to public emotions and the decision to respect them.”

Back in the early 20th century when Liande was leading the charge over the Manchurian flu and makeshift masks first started circulating, they were often stamped with temple seals. Today, ‘designer’ masks have become big business in Japan, China and South Korea. Teens especially tend to customise and embellish them, in the same way a child might graffiti the cast on a broken arm.

There are cosmetic reasons, too. One 2011 Japanese survey on mask-wearers in Tokyo found that many girls said they made their faces smaller, or that it gave them a  ‘mysterious’ appearance.

If any further indicator were needed as to their gentrification potential, pop icon Billie Eilish sported a Gucci-emblazoned face mask to the Grammy Awards in January, and designer versions were popping up all over last month’s Fashion Week.

For sulky teens and introverts, masks have an obvious appeal when you think about it. In public, it’s akin to wearing headphones on the Tube, or sunglasses inside – the ultimate ‘don’t start a conversation with me’ ploy.

Juvenile psychologist Jun Fujikake told Japan Today: “When we deal with others, we have to judge whether to do things like smile or show anger. By wearing a mask, you can prevent having to do that. The trend of wearing a mask to prevent directly dealing with others may have roots in the current youth culture in which many of them are more accustomed to communicating indirectly through email and social media.”

By this token, could the wearing of face masks be a habit that takes off in the West someday? Certainly we Britons rely enough on maintaining an anti-drama ‘keep calm and carry on’ approach towards things like disease and pollution, not to warrant wearing surgical masks en-masse.

But anything to protect us against the horror of unwanted social interaction in public, in a society where it’s harder than ever to keep one’s distance? That might just have legs.