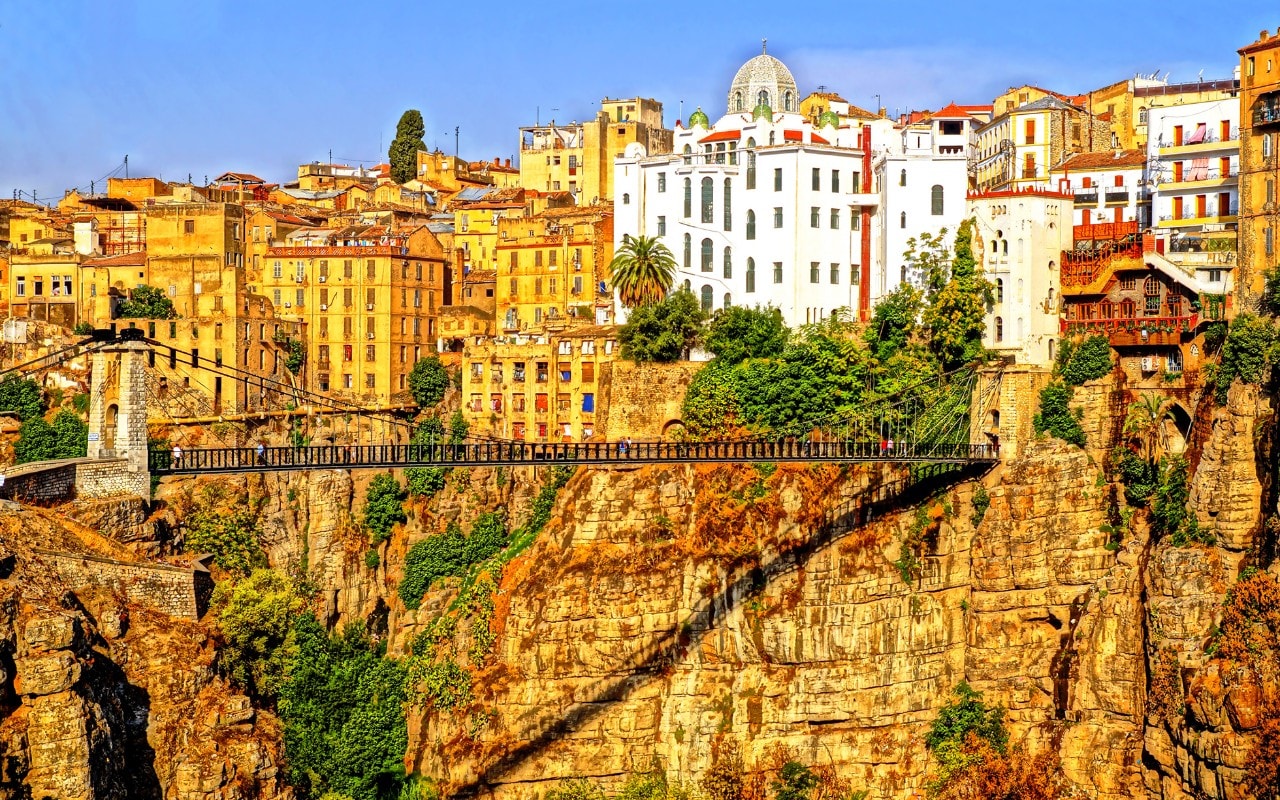 Nestled in a bay 40 miles west of Algiers lie the Roman ruins of Tipaza. First a Punic trading town, then a Roman and Byzantine outpost, it was sacked by the Umayyads in the seventh century and has gathered dust for the last 1,300 years. As I walk down the Cardo Maximus, the road’s ruined pillars seem to unfurl themselves towards the dark blue sea. Around me are remains of millenia-old homes and baths, peppered with bright red flowers and dark green wormwood; half-taken over by nature. On a rocky outcrop across an inlet sit the remains of a once-mighty basilica, a reminder that for centuries this was a Christian town.

All one hears at Tipaza is the birdsong, the sound of the waves breaking against the shore and the quiet chatter of the occasional local couple looking out to the Mediterranean Sea. It is a place of bewitching beauty. It is where, in 1943, Charles De Gaulle and Minister-Resident in North Africa Harold Macmillan strolled and plotted out the future of the war. And – marked by a faded but maintained signpost overlooking the bay – it is here that Albert Camus said he experienced a “wedding day with the world”, where he “understood what is meant by glory: the right to love without measure”.

Incredibly, I am the only foreign tourist. The same goes for my whole eight days travelling across Algeria, perhaps the Mediterranean’s last unknown destination. It is only two hours and 15 minutes from London Gatwick, direct with British Airways. The FCO also deems the vast majority of the country safe to visit. It is the perfect blend: undisturbed by tourism, safe enough to travel without a guide, and with an abundance of sights to see.

Before Tipaza, I visit Constantine in the North East. Named after the Roman Emperor, continually inhabited for thousands of years, it is one of the most visually striking cities I have seen. It perches on a colossal, 600-foot plateau. Seven giant bridges, including the largest stone bridge on earth, span the immense ravine as the Rhumel River flows far below. For a day, racking up 30,000 steps, I am enchanted by this city – its mix of French and Algerian architecture, its stunning collection of prehistoric, Numidian and Roman artefacts in the Cirta Museum, and its vista of sprawling Algerian hills. I explore it accompanied by an eroded 1936 ‘Touring Club de France’ map from the country’s colonial days.

It culminates in a journey to the top of the oldest district, its original form largely gutted by French boulevards, at the Bey’s Palace. This symmetrical, arched home of the last Ottoman ruler seals out the sound of the markets mere metres away. The walls are lavishly decorated with paintings of his naval adventures. Amongst his sea and cityscapes one can make out another Constantine, the towering minarets of the Blue Mosque of then Constantinople.

Next, two hours away by car is the Roman city of Timgad. For the equivalent of 65p, I have 120 acres of another civilisation to myself. It is one of the best examples of a Roman grid plan in existence, a perfect square, preserved under the Sahara for centuries. I wander alone beside shells of homes, marketplaces, fountains, and temples. The mountains loom in the distance; this was a frontier for the Romans against the Berbers, as it would be a frontier more than a millennium later for the French against the raiding parties of the pro-independence FLN. As I step into what is left of the city’s ancient library – one of the best preserved worldwide – for a fleeting moment I feel the coolness of the interior, the quiet patter of shoes, scrolls being unrolled. Then I am back, with a jolt, in this roofless vestige of the past.

Being a tourist here is not all straightforward. The visa was costly, paper-based, and involved two trips to West Acton to file the paperwork. Traditional food is surprisingly hard to come by, as Algerians eat at home and there is not yet a tourist-oriented restaurant culture. For the most part no one knows quite what to do with me. This was particularly striking as I landed in Ghardaia, 400 miles to the south where, after a good deal of bafflement, I ended up with a full police escort from the airport to the hotel. Reached by an internal flight, it is not even halfway into the largest country in Africa – a flight from Algiers to its southernmost city takes longer than travelling from London to the capital.

And Ghardaia, one of five hill towns in the M’Zab Valley, is another world. Surrounded by desert, each is crowned by an 11th-century minaret, erected by the Idabiyya. Inside their walls, society is unchanged. The women of the Valley wear long white veils, with one eye visible. Each day they alternate which eye to use, so as not to damage their vision. Just as Algeria can transport you back into its classical past, it can also share with you its timelessness: for the untouched residents of Ghardaia, their past is still the present.

Despite its safety now, remnants of conflict exist across the country. In the words of my Algerian neighbour on the plane, “we are a fighting people, at war for 130 years”. That struggle for Algerian independence, starting with the French occupation in 1830 and culminating in the savagery of the French-Algerian War of 1954-62, is hard to avoid – particularly in the capital, Algiers. Whether the towering Monument of Martyrs, the centuries-old blinding white casbah – with buildings still unrepaired from bomb damage, or the Museum of Algerian History, where schoolchildren look on at graphic representations of torture chambers, the memories are everywhere.

Thirty years after independence, a decade-long civil war wracked the nation, leaving 150,000 dead. Secular protests, peaceful in nature, have sprung up over the last year, with lively marches against corruption and the government taking place every Tuesday. It is still a country of contradictions: one couple told me that though the Civil War removed a political conflict within Islam, the fight goes on at a societal level as moderate and hardline interpretations of Islam mingle and vie with each other.

But it is this burden of history, this canvas of conflict and contradiction that Algerian life plays out on, that makes it what it is today. The fact the waves crash rather than lap against the shore at Tipaza is what makes it so distinct. The heavy memories of its past mean the country now sizzles with energy, enthusiasm, and a love for life.

I hope Algeria opens up, and more people can experience it. But if, like Camus, you prefer your wedding with the world on your own terms, visit now. Before long, the burdens of tourism may just bring too many guests to the nuptials.

How to get there

Direct, daily return flights from Gatwick to Algiers are operated by British Airways, for around £200 per person. Houari Boumediene Airport is a short taxi journey from the city centre.

Airbnb is available across the country, for an average of £50 per night. In Algiers, don’t miss the Hotel El-Djazair, formerly the Hotel St. George which doubled up as the North Africa Allied HQ during the Second World War and hosted General Eisenhower as well as Winston Churchill. Double rooms are available from £120 a night, with the best prices on Expedia.

You must apply for a tourist visa, ran by the Algerian Consulate in London. The cost is £85, and applications can be made in person or by post. See the Foreign Office website for more advice.

Air-Algerie runs regular internal flights between the major cities, including Algiers, Constantine, Oran and Ghardaia, which usually cost around £30 each way and can be booked on any flight comparison website. Buses and taxi collectifs are also available, as well as rental cars from the airport. Taxis are plentiful, and Algeria’s version of Uber is an app called TemTem.