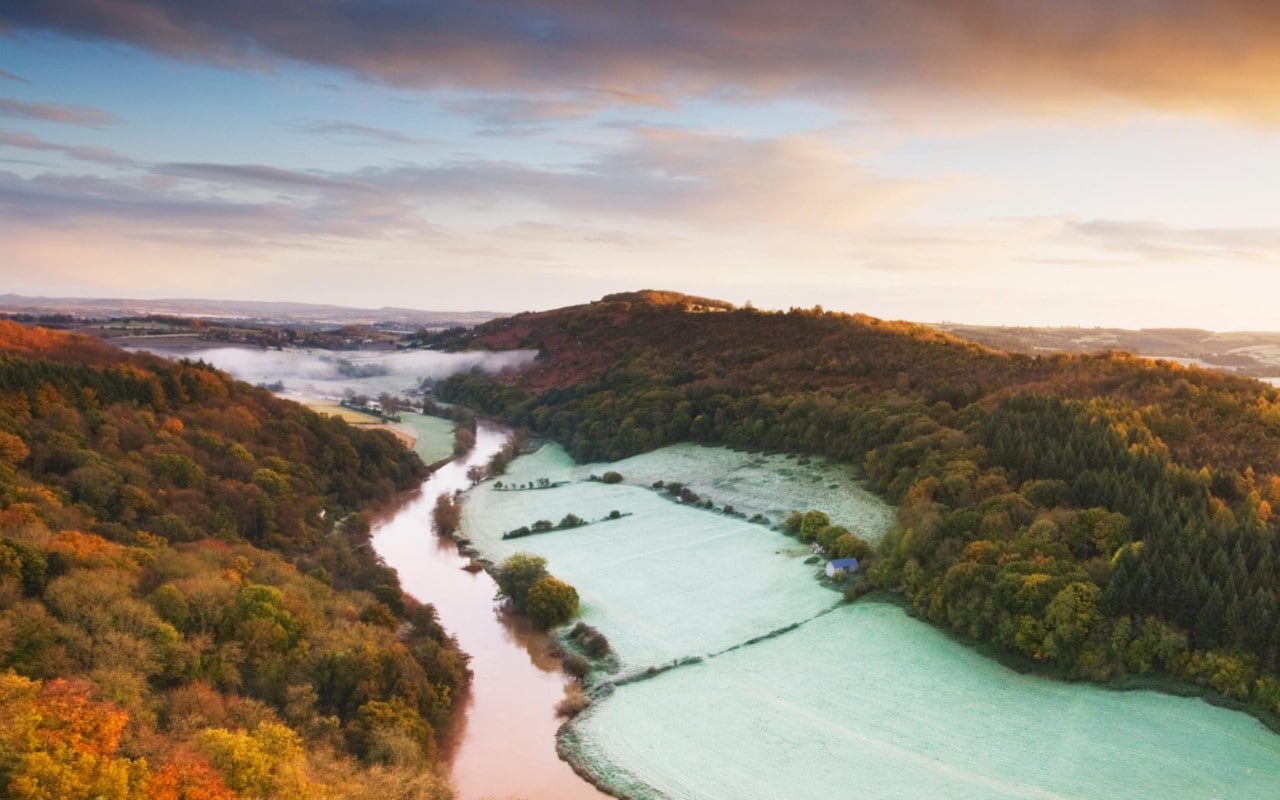 The window-cleaner paused mid-squeegee. I’d disturbed him on the lofty terrace of Ross-on-Wye’s Royal Hotel, and now we were both looking west to the river’s handsome horseshoe bend. He smiled: “This is one of the best places I do my job.”

Many have admired this view before, and no doubt will do so again once the once the floodwaters caused by Storms Ciara and Dennis have receded. The hotel, built in 1837, was popular with cultivated travellers embarking on the Wye Tour, a two-day boat trip from Ross to Chepstow that was the leisure pursuit of the early 19th century. Since clergyman William Gilpin made the journey in 1770 and published Britain’s first tour guide about it, cruising down the Wye, sketchbook in hand, became a must. Gilpin not only extolled the river’s beauty but prescribed rules for what should be considered properly picturesque, thus shaping how we appreciate the British landscape.

With events and exhibitions being planned throughout 2020 to celebrate 250 years since Gilpin’s meander, I decided to follow his route myself. More in the mode of Wordsworth’s 1798 visit, I was travelling on foot, spending three days hiking the Wye Valley Walk to assess just how picturesque the river is these days, and how tourism has – or hasn’t – changed.

I began by turning my back on the water, as the trail headed up into the hills. It felt a bit perverse, though not disastrous: according to Gilpin, “the first part of the river is tame… there is scarce an object worth attention”.

On my inland route I found plenty, leaving Ross behind for fall-tinged woodland, crunchy underfoot with the husks of sweet chestnuts. Hills pillowed, squirrels mad-dashed, berries colour-popped, the sun blazed.

After a few miles I returned to the Wye, to a view Gilpin deemed “one of the grandest on the river” – the sight of Goodrich Castle rising above the west bank that he found “correctly picturesque”. The 13th-century keep is certainly ruined to a pleasing degree, its red sandstone softened by time but remarkably intact: I detoured to admire its portcullis winch-holes and long-drop latrines, and squeeze up a narrow spiral staircase to gaze down on the river from which Gilpin had looked up.

After Goodrich, I started walking alongside the Wye, listening to the water chortle and waving to modern-day tourists – though their Canadian canoes weren’t a patch on their forebears’ canopied pleasure boats.

With every step the Wye remained pretty as a picture, becoming ever more secretive as the banks rose higher. At Coldwell Rocks, early Wye tourists traditionally disembarked to climb up Yat Rock. I climbed it too, and found people at the summit gathered around an RSPB volunteer and her telescope, scanning for peregrines and deer. The view, over the fiery forest and calligraphic river, is indeed one of the country’s most correctly picturesque. “We had a group of 11 painting here the other day,” the RSPB guide told me. “Easels everywhere.” I contented myself with a photo, then headed to the Saracens Head at Symonds Yat for an excellent dinner and a Wye-side sleep.

The next morning the scene was no less artistic: low fog had settled in, conveying – just as Gilpin reckoned – “a beautiful, grey, harmonising tint”. If there was something of the not-quite-real to the paintings of the picturesque era, this was its embodiment. I walked through the mellow, mist-smudged, moss-furred valley, feeling removed in an other-worldly way that is perhaps more pronounced now than it would have been 250 years ago. When Gilpin travelled, industrial activity was rife along the river south of Monmouth: the waterway was plied by flat-bottomed trows conveying goods to Bristol, and metalworks hammered at Redbrook and Tintern. Indeed, the latter was one of the country’s key wire-making centres; Wye tourists, drawn here for the 12th-century abbey, wrote of seeing glowing forges.

But not now. After another scenic day’s walk, via Monmouth’s bustle and woods that inspired Wordsworth, I reached Tintern to find it sleepy under a light mizzle, and concurred with Gilpin: “a more pleasing retreat could not easily be found”. I watched the cloud close in, Mother Nature’s smoke machine adding spookiness to the old stone. But it wasn’t until the next morning, after a night at the Royal George, that I fully appreciated the scale. I was the first tourist at the ruins but, gazing up, awestruck, I noticed a man doing the same – Tintern Abbey’s caretaker, Pascal: “I come early every morning, just to look.”

I left Tintern bound for Chepstow, first in the footsteps of Cistercian monks from abbey to grange – before entering Piercefield. Here, in the mid-18th century, owner Valentine Morris set about making his estate the apogee of picturesqueness, creating a panoramic walk with grottoes and follies. Though Gilpin didn’t consider Piercefield within his rules, he did concede it was “extremely romantic”.

Today, Morris’s vision is obscured by untrimmed trees. But I was more fascinated by the history: stone benches engraved with Victorian graffiti prove tourists haven’t changed so much over the intervening years.

At Chepstow the Wye empties into the Severn and my walk came to an end, in the shadow of the indisputably pretty Chepstow Castle. But a more fitting end was just across the road, in Chepstow Museum, home to a large collection of Wye Tour paintings and prints. “It was a big shift, to go out into the landscape to paint,” curator Annie Rainsbury told me, pointing out some delightfully overdramatic depictions of Tintern. “They needed a new vocabulary to talk about the aesthetics of looking at landscape; referencing back to art was the only way they knew how to describe it.”

Gilpin once said: “If you have never navigated the Wye, you have seen nothing.” Our holidaying horizons have expanded significantly since the 1770s, but still, taking time to travel slowly – be it on foot or by boat – down this most “correctly picturesque” of rivers is to see something indeed.

Chepstow Museum has a range of art and a new Wye Tour exhibition opening summer 2020 to mark the anniversary (free; monmouthshire.gov.uk). The Wye Valley River Festival will feature tour-related events (May 2-17; facebook.com/wyevalleyriverfestival).

Observations on the River Wye and Several Parts of South Wales by William Gilpin. More info at gilpin2020.org; wyevalleyaonb.org.uk; wyedeantourism.co.uk.