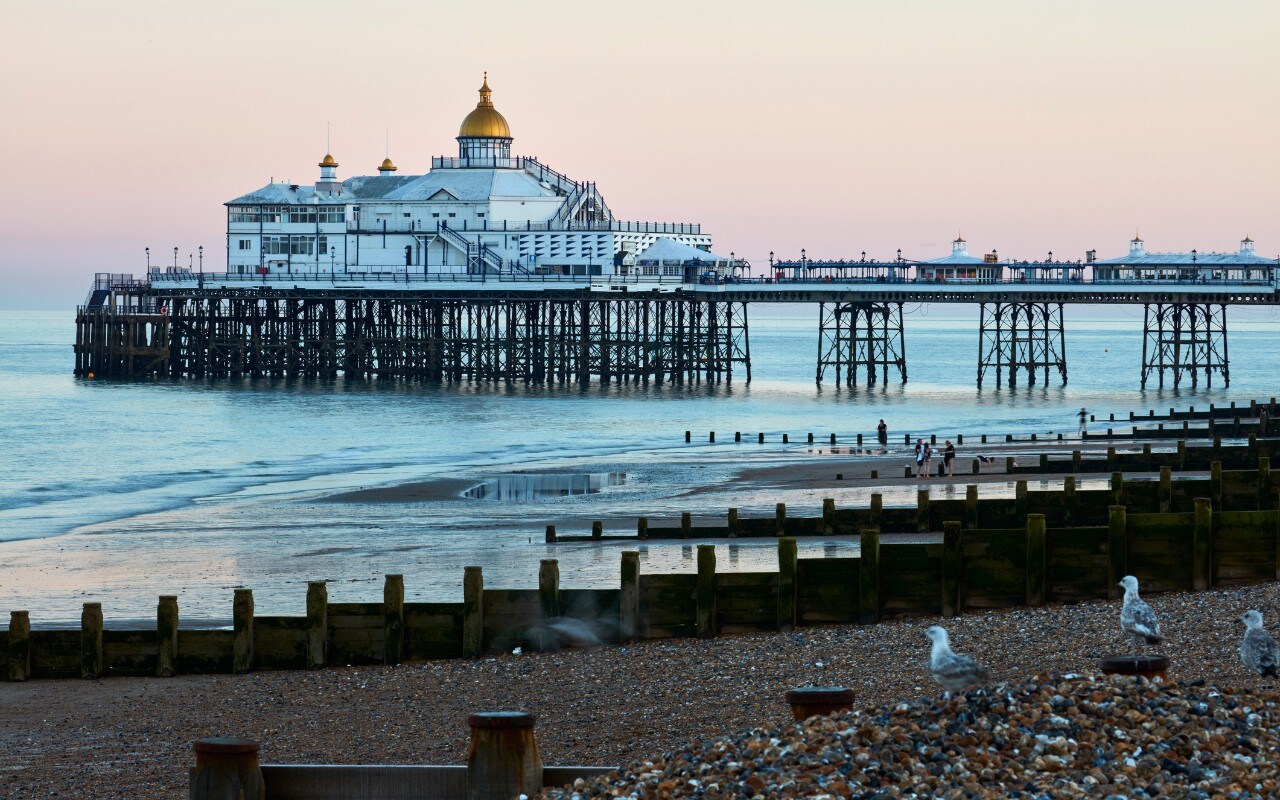 I swim towards the sunrise, a pale morning sky. The air is cold, the sea colder, maybe six degrees? After a winter of swimming without a wetsuit and I am now acclimatised. I can enter the water without swearing. But the cold still grips my bones like a vice, soon gives way to numbness, then a prickling in the palms and soles of my feet. I do this for pleasure, and to forget the news.

Afterwards, glowing pink, exhilarated, I wrap up in a towel and walk briskly back to my hotel for a hot shower. A hundred years ago, I would have courted a fine for such behaviour. In Eastbourne, a bye-law prohibited bathers from crossing the road from hotel to beach in swimwear, even if modestly covered by a coat. In 1929, a group of 40 people wearing macs over swimsuits disobeyed this decree and were promptly arrested. News of this ‘Macintosh Protest’ made national headlines and the south coast seaside resort became a laughing stock. The Home Secretary ordered the council to rescind the bye-law.

Eastbourne – mostly designed and built by William Cavendish, the 7th Duke of Devonshire in the 19th century – has never been daring. It is a byword for gentility, renowned for its elderly population, and sometimes called ‘God’s Waiting Room’. But as property prices in neighbouring Lewes, Brighton and Hastings have spiralled ever upwards, an increasing number of younger families are setting up home in this more affordable and hitherto less fashionable East Sussex town.

The change in demographics has resulted in hip new cafes, shops, bars and cocktail joints, especially in the small side streets near the train station. “It’s becoming similar to the North Laine area of Brighton,” says Russ Taylor, owner of Taylor’s wine bar, that he and his wife, Emma, opened in November 2018. Last Saturday evening, the intimate bar was busy with local residents in their 30s, sharing bottles of rioja and greeting each other with kisses and hugs, oblivious to announcements that would follow within days. “People are enjoying a last hurrah,” said Taylor, stoically. Nearby Company, an ‘all day bar and eatery’ that opened in 2019, was so full it was turning people away unless they had a booking. A taste of its food, including vegan dishes such as Penang jackfruit and smoked mushroom curry, explained why. In Bear Club cocktail bar – deer antlers and surreal oil paintings on dark loft walls; flickering candles, deep leather arm chairs, staff painted and pierced – I sipped a ‘Rosie Cheeks’ concoction. It was like a fun evening with the Addams family. Those days will come again.

Two major nips and tucks have given this Grande Dame of seafront resorts a facelift. A multi-million pound Bauhaus-style makeover of the Congress Theatre next to the always-excellent Towner art gallery, and an £85m extension to the town’s Arndale shopping centre – now renamed The Beacon Centre – where brands such as Fat Face and Jack Wills trade below a multiplex cinema. Meanwhile the new owner of the town’s grade-II* listed Victorian pier, has annoyed and charmed residents in equal measure with his blingtastic makeover, painting as many surfaces in fake gold as he can.

But these man-made developments are mere baubles compared to the town’s enduring natural assets: its coastline and the South Downs National Park. Two miles from the pier and you are on the uplands of the chalky downs, heading inland or along the coast, landscapes captured by 1920s watercolour artist Eric Ravilious, who features strongly in the Towner Gallery.

Climbing steps from a deserted beach of calcareous boulders onto the downland, a skylark sings high above and the sea shimmers. The hill is steep but worth the climb. At the edge of precipitous white cliffs I look down to see four young people cartwheeling on a lonely patch of sand, a dog running between them; stripy Beachy Head lighthouse in the distance.

You can walk for hours on this rollercoaster of bright cliffs and see very few people. At Birling Gap, a row of former coastguards’ cottages is inexorably disappearing into the sea. A line on the floor in the visitor centre shows where the cliff edge will be in the 2050s with the annual 0.7m erosion rate.

If you’re not up for long and arduous hikes out of town, there’s a four-mile prom. At the western – Holywell – end I sat on one of many wooden benches, all alone in the shade of evergreen oaks and Scots pine, while a wren trilled merrily. The sea was blue through twisty branches, waves sighed on the pebbles. The news seemed far away.

Some older folk aren’t letting this pandemic deter them. Rosemarie and Gordon Holmes, both in their 80s, from nearby Horsham, checked into the budget Citrus Hotel on Eastbourne’s seafront on Monday for a three-night break. “We go away every month and were determined we wouldn’t let advice like this stop us,” said Gordon. “I’ve already got two life-limiting conditions and we’ve lived a good life,” he said stoically.

Further along the seafront, on Tuesday morning, a coach full of pensioners was setting off from West Rocks Hotel. The coach wasn’t taking them home, however; they were heading off on a mystery excursion. Hotels that haven’t been hosting reckless pensioners have been laying off staff as bookings disappear. One man, who didn’t want to be named, told me he’d just lost his job as night manager. “I came in to find a line through my name on the rota,” he said.

Eastbourne’s tourism industry has suffered severely in the past. During the Second World War the town was initially judged to be a safe haven and children were evacuated here – but things soon changed. Hotels closed as Eastbourne became the most heavily bombed non-military town on the south coast. Enemy planes dropped unspent bombs when flying home from raids on Coventry and London; 180 people lost their lives and hundreds more were injured. Nearly 500 homes and businesses were destroyed. Eastbourne, which often claims to bask in more sunshine than anywhere else in the UK, has experienced even darker times than we face now.

The peace of wild things, the scale of geological time, the cold, sparkling sea, warm sunshine, the first cowslips of spring: they are a soothing balm.