‘Like Britons, Americans are dealing with not being allowed outside by going outside’ 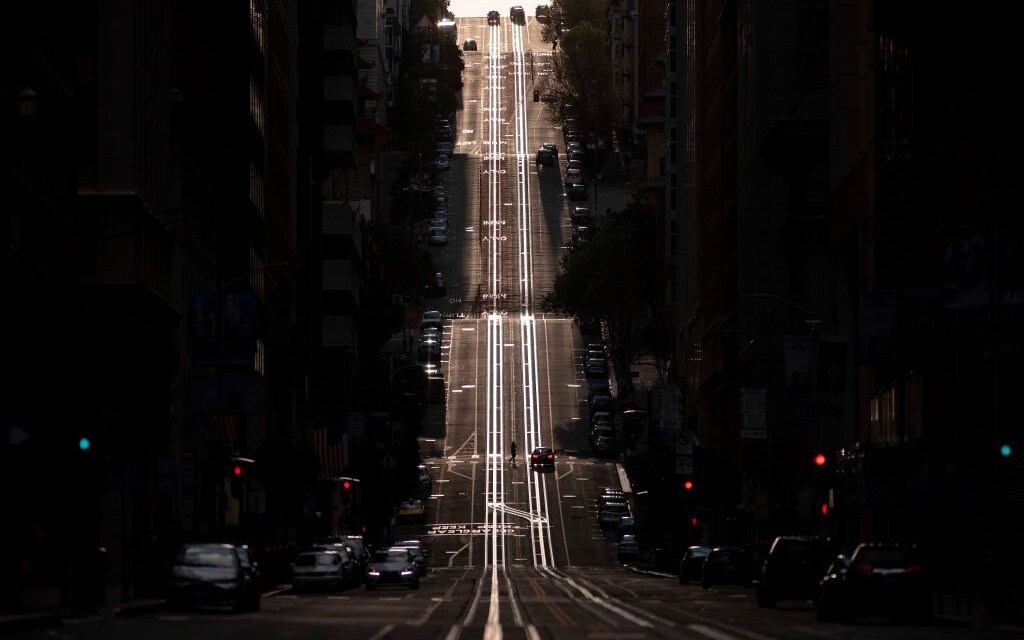 In the Hayes Valley neighbourhood of San Francisco, everyone knows two things.

One: If you have to sell your family members to cover your rent, do it. Sorry Nan, it’s America. Off you pop.

Nabila’s is a family-run grocery store. They sell organic veg and kombucha and sourdough and a jar of mayonnaise costs about £5. They are effortlessly lovely and they stock tremendous yoghurt, but they are also the type of pricey independent market that wouldn’t have touched this street before the city’s various tech booms pushed out Hayes’s poor and brought in young, professional types with suddenly much more to spend on cucumber kimchi.

Now, Nick’s is also independent but the mayonnaise is only the equivalent of £4.50 — an important saving on a weekly shop in a city this chokingly expensive. At Nick’s, when you can’t find the mayonnaise, or even if you’re not looking for anything in particular, the owner sweetly barks help at you. As staff hump box after box from the storeroom, it often has the feel of a factory rather than a shop, and now more than ever.

I go to pay and the man at the till is wearing surgical gloves and wiping down the counter. He picks up my accent and asks where I’m from and what I do. I tell him I’m a journalist.

“Do you cover this topic?” he asks. He doesn’t need to explain which topic. He knows and I know. This topic has become the only topic. Now, everyone in this neighbourhood knows three things.

San Francisco has been locked down for almost a week and California followed on Friday. Shops, bars, restaurants, public buildings. Except for essential trips, the state’s 40 million citizens have been told not to go outside.

Perhaps it will help that San Francisco, as we are often told, is innovative. And in some ways it’s true. The city seems to lead the way for acute urban crises that are at a more embryonic stage elsewhere. The acuteness of housing shortages, collapsing public infrastructure and homelessness are not exactly new experiences for other rich western cities, such as London, Paris and New York, but these problems have been fermenting here over more than a generation. London, Paris and New York are now following this city again when it comes to lockdown measures. Seen from the rest of the world, it seems San Francisco is often in the beta phase of some new crisis.

One lesson from the Bay Area might be to watch how you wipe. Toilet paper shortages due to stockpiling are causing residents in Marin and San Rafael to clog up pipes with wipes and kitchen towels. Plus, many of the city’s 150,000 homeless people have no access to a bathroom. If you live on the street, where exactly can you go? Like weed and coffee, excrement will continue to be one of the city’s distinct smells.

The success of social distancing will depend on how we adjust to these new modes of living. The Embarcadero, a ferry terminal on the Bay with waterfront food markets, was still busy on Saturday afternoon. As I eyed up some fabulous Californian marmalade, I saw that shoppers were stopped from picking their own fruit at the stalls by yellow tape. A headline in the San Francisco Chronicle warns: “If you touch an onion at SF farmers’ market, it’s yours”. I bought a jar of Sacramento Valley walnut butter because a) what in God’s name is that? and b) the jar looked wipeable and might end up being a valuable commodity if I soon have to barter for supplies. That didn’t seem to worry anyone else, though.

Because, like many people around the world, San Franciscans are dealing with not being allowed outside by going outside. Golden Gate Park — a three-mile-long park that reaches from the Pacific Ocean into the city — has been overflowing this week. Exercising is exempt from the ban, so an ordinarily active populace have been charging into the park like they haven’t seen grass since Eden.

Perhaps this charge is exacerbated because the shutdown has closed, temporarily but remarkably, Yosemite. One of America’s most iconic national parks, it sucks in affluent weekending San Franciscans throughout the year. With that, city residents get something of a weekly breather from the acidic tension between the gilded workers of vampiric tech empires and the creaking municipal antibodies. On a pavement beside Alamo Square park, near Haight-Ashbury, someone has scratched: “Deport techies”.

Of course, the rich will always have their escapes. The Napa Valley wineries, north of the city, have been declared “essential services” by the governor and will stay open. But the closures of Yosemite and nearby Lake Tahoe are some of the ways in which this virus will mean we are all living on top of each for the time being, shepherding even the supranational power of the unaccountable back to the necessity of the civic.

As I take my bags from Nick’s and walk home for a sixth night of fighting the tech capital of the world’s surprisingly wretched broadband, I spot that one of my favourite local coffee stops is still open. They are allowing in only one customer at a time and operating a take-your-coffee-and-get-out approach. The getting of coffee, for a long time a mass-participation sport in America, is probably the eminent national pastime now that baseball has shut down. And the serpentine queue shows that getting outside and buying stuff is going to be vital here, especially when the coffee is so good.

Because, really, I expect people in San Francisco will get through this in the way they usually get through things. With sun, avoiding the bus, and jars of locally-sourced walnut butter.