How to have a New York holiday without leaving home 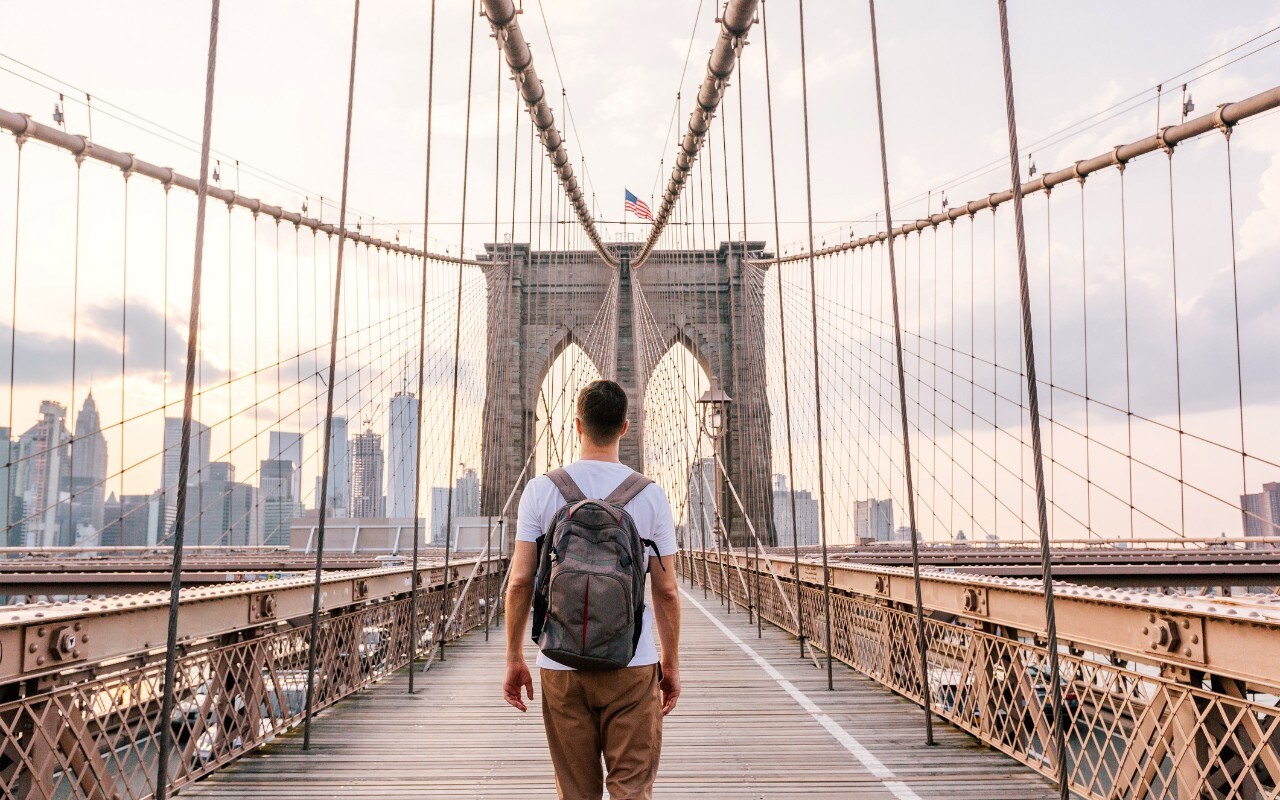 We are in a time that, if not unparalleled, presents a fair few problems. One of those, though not the most pressing, is that, in the coming weeks, it may be hard to journey far.

But that does not mean that we cannot travel “virtually”. The early 21st century is an era of unprecedented connectivity, and with the internet and smartphones at our fingertips – with all the websites, streaming services and apps that that entails – we can “go” just about anywhere. How? Through movies, television, music, art – and even food and drink.

In the first of what will be an ongoing series, here is how to “visit” New York from home.

This bittersweet over-the-shoulder look at a New York couple, and the “progression” of their relationship from early attraction to (largely) amicable split flits across the city. Prime locations such as Central Park, Fifth Avenue, and the Coney Island theme park all crop up on screen as Diane Keaton and Woody Allen flirt, have fun, and finally fall apart.

Well yes, as the title rather indicates, much of this romantic comedy – starring Tom Hanks and Meg Ryan – is set way out north-west in Washington state. But as anyone who has watched this unashamedly soft-focus tale – of a widowed father finding new love – will know, the denouement takes place on the observation deck of the Empire State Building.

Yes, of course – everyone knows this Nineties and early Noughties sitcom behemoth was largely filmed in a studio in Los Angeles. But if you want a glimpse of witty New York coffee-shop culture and twenty-something romance, Friends delivers it like nothing else. Plus, all those establishing shots of the Manhattan skyline deliver you straight to the city.

Again, largely a studio production, but one which trawls a particular era in, and strata of, New York life, with style and precision – specifically the advertising industry in Manhattan, amid the cigarette smoke fug and cocktail-glass clink of the 1950s and 1960s.

The band, fronted by Debbie Harry, were the most glamorous thing to emerge from the New York punk scene of the mid-Seventies. By the time their third album emerged in 1978, they had honed their art into a sharp brand of punk-pop best demonstrated by the likes of One Way Or Another and Picture This. But they were just as aware of the city’s disco explosion – the stand-out track Heart Of Glass is aimed squarely at the dancefloor.

A troubled soul he may have been (heroin abuse contributed to his early death at just 40), but John Coltrane was one of the heartbeats of the New York jazz scene in the Fifties and Sixties. This 1964 album is not his best work, but it does capture the virtuoso saxophonist at one of the city’s most celebrated jazz clubs. The original Birdland no longer exists – it stood at 1678 Broadway, closing due to rising rents in 1965. And yet this record, though a fine epitaph, was not the end. A modern version of the club exists at 315 West 44th Street.

Fitzgerald is, of course, most celebrated for The Great Gatsby – but it is the predecessor to that 1925 masterpiece which best captures New York in the Jazz Age. Published as the author’s second novel in 1922, The Beautiful And Damned is a portrait of a glamorous but dysfunctional couple, always on the verge of collapse as they career around the city’s many bars and cocktail jaunts in the build-up to and the aftermath of the First World War.

I’ll Drink To That

This memoir comes with a large slice of Fifth Avenue sophistication, and a fair dollop of gossip. Betty Halbreich has made a career of being a personal shopper for the rich and richer – guiding those with the cash and the desire to spent it around the department store Bergdorf Goodman (including Meryl Streep and Liza Minnelli). She also assisted in styling the Sex And The City cast, and has performed a similar role for Broadway shows.

Ever since it was crafted in 1942, culture vultures have wondered if the diner placed onto canvas by the great American painter Edward Hopper was – or is – a real place. Hopper was vague about the possible location, saying that the germ of the idea was “suggested by a restaurant on Greenwich Avenue where two streets meet”. Nonetheless, the piece succinctly captured a small-hours scene in Greenwich Village, the area of Manhattan where the artist once lived. Arguably – although the clothes have changed, and the smart outfits and hats have gone – it still does, eight decades later. The work can also be found in modern life – in both the physical and online collections of the Art Institute of Chicago.

A cornerstone of Midtown Manhattan, the Museum of Modern Art is one of the world’s true temples of 19th, 20th and 21st culture – playing host to marvels by artists from across the planet. More than 84,000 of them are available to view in its digital library. These include The Starry Night by Van Gogh – and Henri Matisse’s ecstatic triumph Dance (I).

Sport does not come more New York-branded than the Knicks (or the Knickerbockers, if you want to be strictly accurate about the full name), the NBA (National Basketball Association) outfit that – for extra allegiance to the city – plays at Madison Square Garden. The current millennium has been a disappointing one (although the Atlantic Division title was won in 2012-13) – but true sporting experiences require lows as well as highs. You can find a vast library of performances on the team’s official Youtube channel.

A cliche? Possibly. But is any cocktail more closely associated with the Big Apple than this eternally happy alliance of rye whiskey, sweet vermouth and bitters. Legend has it that the tipple was created at some unspecified point in the 1870s at the Manhattan Club – a high-society oasis which, between 1855 and 1979, stood proud on East 26th Street. There are various minor variations on the basics – and ideally you need a maraschino cherry to complete the picture – but as long as the holy trinity is swilling around the glass, you’re on the right track. Helpfully, you can find a recipe – via the Telegraph – right here.

Yes, of course, you could demand a New York strip steak – the particular cut of short-loin beef which is thought to have sprung from the city’s Delmonico’s restaurant in 1827 – but there is something quintessentially Big Apple about a pastrami sandwich. True, this salted, semi-dried take on beef originated in Romania, but it has become a staple of the city’s daily existence – Sussman Volk, a kosher butcher and Lithuanian immigrant, is generally credited with building the first pastrami sandwich, in 1887. Numerous food hotspots have made it an art-form – such as Katz’s Delicatessen in the Lower East Side – but the procedure is reasonably simple. Again, the Telegraph can guide you through it.