How coronavirus has decimated global aviation 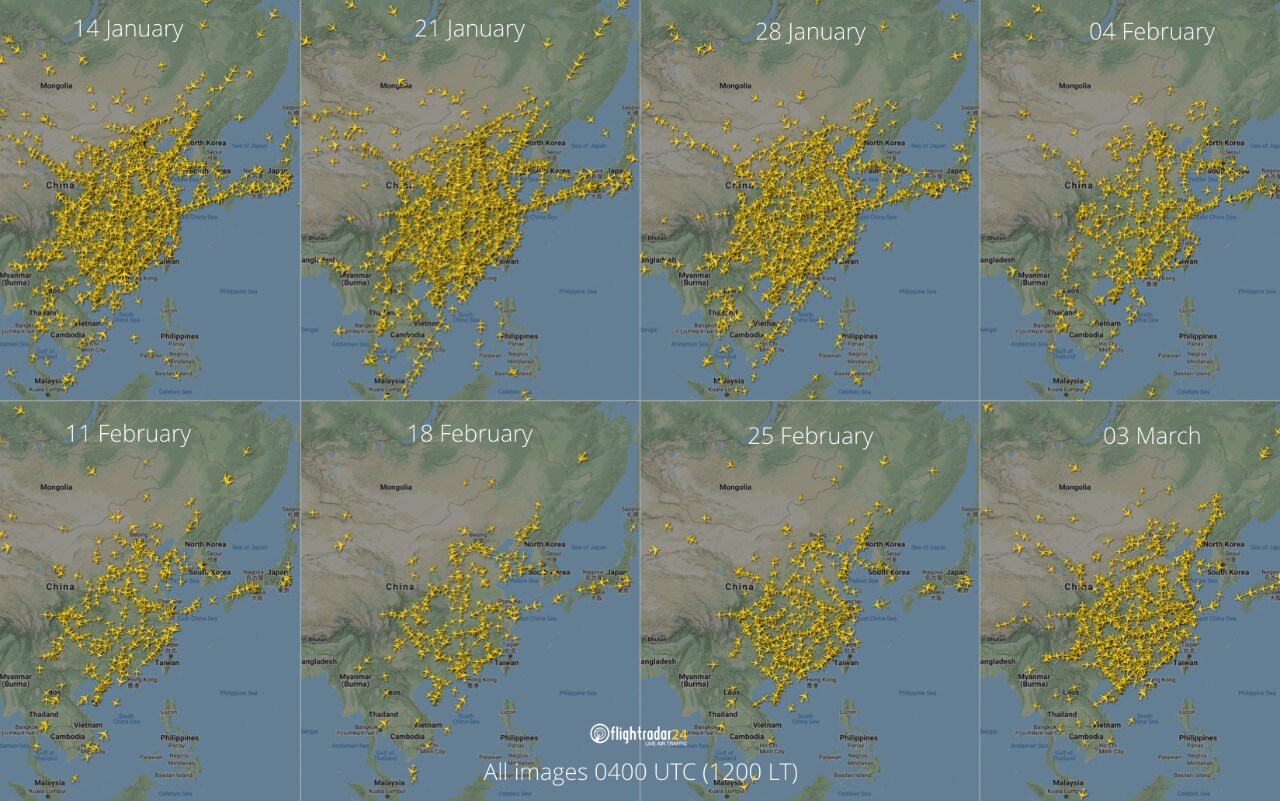 New figures have laid bare the unprecedented collapse of global aviation, with air capacity down by almost 60 per cent in Western Europe and more than 40 per cent in most other regions.

The travel analyst OAG tracks the number of available seats for every country and airline on the planet. Globally, capacity has been cut by 35 per cent. But with many airlines flying with thousands of empty seats, the decline in actual passenger numbers is likely to be far higher. Furthermore, the decline shows no sign of slowing, with restrictions on movement and flight bans fast becoming the norm.

Until recently, China and its neighbours were the worst affected destinations. In the week commencing January 20, 16,882,726 seats were offered on flights to and from the world’s most populous country. This week the figure is 9,205,256, a fall of 45.5 per cent. While dramatically lower, this actually represents a significant rally after a weekly low of 4,690,056 seats in mid-February.

Other countries in the region, many of which rely heavily on Chinese tourism, have seen similar drops. Japan has seen capacity cut by 27.9 per cent, for example, while Vietnam has suffered a drop of 60.6 per cent.

In terms of airlines, OAG’s figures present few surprises. Dwindling demand has seen carriers have been forced to ground hundreds of planes, with Ryanair cutting its available seats from 2,522,583 for the week commencing March 9 to just 276,696 this week – a fall of 88.7 per cent. For British Airways the figure is 58.1 per cent. With the Foreign Office currently advising Britons against all but essential overseas travel, and UK travellers unwelcome in most countries around the world, that is likely to fall further in the coming weeks.

According to John Grant, senior analyst at OAG, the scale of the global aviation shutdown is unprecedented. “This has never been seen before, and the impact not just on aviation but global trade will be immense,” he said. “Furthermore, it has the potential to go deeper before any shoots of recovery appear. It’s really a matter of time for some markets that are less impacted to see the same results as we are now seeing in Europe.” For many airlines, he added, collapse could be “weeks away”.

The skies are emptying

The fall in air capacity can be seen in the images and animations below, produced by the aviation tracking website FlightRadar24.

This is a snapshot of the skies above Europe one month ago:

Here the fall in flights to and from Italy is clear:

China saw a swift decline but has recovered somewhat in recent weeks:

In America, the fall in air traffic is far smaller – but still noticeable:

Across the world, the number of active A380s has dipped:

And here is the global picture:

Why are so many planes still flying to Britain?

Despite UK citizens being urged to stay at home and avoid non-essential travel, British Airways is still offering 456,505 seats this week, and EasyJet 811,758. Hundreds of flights are still operating to and from British airports, including some to and from coronavirus hotspots like Italy, China and Iran. Flight IR711 from Tehran, for example, touched down at Heathrow on Sunday afternoon. This is because, unlike other countries (the EU has announced temporary restrictions on all flights from non-EU countries), Britain’s borders remain open. The policy has been widely criticised but the Government claims there is no evidence that travel bans have any effect on the spread of infection.

The upside of coronavirus

Environmentalists have got their wish – we’ve all gone flight free. And a 35 per cent cut in air capacity translates to a global daily reduction of around one million tonnes of CO2.